August 9, 2017
The day I moved (back) to Switzerland to finally work in my favourite sport: football.  I had been offered a place in the Event Operations department at UEFA to focus on the UEFA Champions League and UEFA Europa league, and needless to say, I was pretty stoked.

My Canadian passport came in handy here, providing the prospect to obtain my own work visa through the Youth Mobility Program offered thanks to a Swiss-Canadian treaty.  However, there was still an “I can laugh about it now but at the time I completely freaked out” moment where I had to fly from Toronto to Montreal and back the day before my flight to Switzerland in order to pick up the visa (the Swiss administration and immigration systems definitely deserve their own blog post…coming soon).  Shout-out to the saner Krishnan’s for helping me sort that one out.

Since it was only a temporary contract, I managed to sublet an apartment for 4 months, so the day I arrived, I moved straight to my new home in the middle of a UNESCO World Heritage site.

A priority during my time with UEFA was to try and secure a fixed role in Switzerland, thus I hardly expected to end up playing semi-professional football as well!  I tried out for a team in the Swiss national league knowing nothing about the level of football and not having played competitively in years.  Much to my surprise, I made the team, and ended up living out my childhood dream of playing top level football for a few months.  It didn’t hurt that while working at UEFA it wasn’t very difficult to convince them to allow me to leave early a few days a week to play football.

This non-stop football triangle lifestyle joyfully went on for a few months.  By football triangle I mean there was a 1-hour commute to work, a 1-hour commute to football, and then a 1-hour commute home.  By non-stop I mean that it occurred three days a week, with weekend game days.  And I also trained at lunch with UEFA and played for their women’s team.  It was particularly a sight to see during the first few weeks when I could barely walk, or when I scraped all the skin off my ‘sitting area’ thanks to a slide-tackle on frozen ground and had to stand at work for a week. 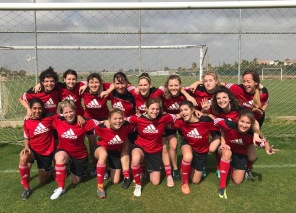 Eventually, I needed to step out of the triangle and focus on my next steps.  I was fortunate enough to secure a permanent role in the Event Department at the International Hockey Federation (FIH), which meant they would organize a visa for me.  As a non-European looking to working in Switzerland, those are literally the magic words.  This meant I could pop home for Christmas, and return to Switzerland to begin fresh.

Jan 5, 2018
The day I returned to Switzerland to continue my sport management career with FIH.  My second week on the job, I was sent to the Indoor Hockey World Cup, which unbeknownst to them was a great move as I had never seen a game before.  It has been an ongoing process learning the ins and outs of field hockey, but over the past 7 months I have settled into my role that focuses on a new series of international developmental events.

Working at an International Federation in Europe has been my goal since I applied for the FIFA Masters Programme in 2014 and this past year in Switzerland has been a unique experience. In 2016 I spent 4 months in Switzerland as a student but life couldn’t have been more different. The transition from being a student to working in this country has provided many unexpected challenges, many of which I was laughably unprepared for, but at the same time it has provided an equal number of interesting opportunities. 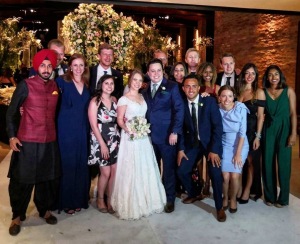 half of my class attended the wedding!

It has offered me the chance to accomplish goals that wouldn’t have been possible had I accepted a job offer at home last year.  During the FIFA Master, one of my classmates proposed to his girlfriend and invited us on the spot to his wedding in Brazil in 2018.  In turn, I promised myself that I would attend this wedding if I had a fixed job in Europe by that time.  It was a huge personal moment when I informed the lovely couple that not only would I attend their wedding, I would cross another item off my bucket list by hiking to Machu Picchu beforehand!

It has also given me great pleasure to introduce some of my favourite people to the beauty that is Switzerland.

August 9, 2018
The day I woke up and was astounded that, for the first time since 2013, I had lived for 365 days in the same country.  My commute time is now 20 minutes, I can speak in French to restaurant waiters, I love my apartment and I truly believe I live in one of the prettiest places.  All in all, a success.  I have no idea what’s in store for the next 365 days, but I look forward to finding out.

One thought on “365 Days Living in 1 Country: The Swiss Story So Far”