How to produce the craziest week-long roller coaster possible in a Masters student’s life:

Step 1: make sure the 32 students in the course are from 26 different countries
⇒ simply being a close-knit group with such various backgrounds means a unique and enriching experience will be had by all…and since it’s nearly impossible for them all to ever be in the same room after the course, heightened emotions when graduating are guaranteed

Step 2: arrange for the thesis to be due one week before graduation
⇒ no one will have time to process that the world as they have known it for the last year is ending
**extremely important** don’t forget to make it a group thesis where the students don’t choose who they work with

Step 3: have the students present their theses to the entire world 6 days later (ie. Scientific Committee, members of FIFA, visiting parents and relatives, and a live broadcast for everyone else)
⇒ sleepless nights are inevitable when they have 6 days to turn a year-long thesis into a 20min presentation delivered equally by 4 people…all to culminate in a euphoric high when the students stand on the stage and showcase their work to the world

Step 4: schedule the graduation ceremony for the next day
⇒ in one day, going from arguing with your final project mates to introducing them to your parents and saying goodbye to them indefinitely will inevitably ensure even the manliest of students – who may or may not have played professional sports and/or spent a night in jail – will end up sobbing

The International Masters in Law, Management and Humanities degree that I completed 3 months ago has perfected this four step process in the 16 years that the course has been running.  There are also a few other sections of the roller coaster thrown in during the year, such as moving to a different university in a new country every three months, and scheduling mandatory class for 8+ hours a day Mon-Fri.  This formula has led to numerous awards like SBI’s Top Sport Management Course in the WORLD in 2014, and I’m happy to note that I still love roller coasters. 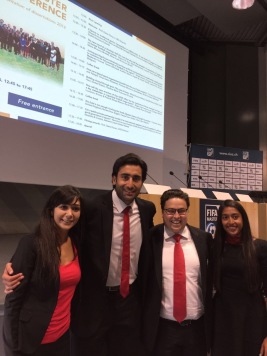 After a lengthy decision process, my thesis group chose to research the topic of e-Sports and its role in today’s sporting world.  This was a ride in itself for me since I began with no knowledge of e-Sports beyond the FIFA games that I had only seen advertised on television.

While the process of creating a thesis topic and writing a paper with three others from diverse backgrounds, and then consolidating everything into a short presentation, was no easy feat, it was quite the learning experience and I’m ever grateful that we chose an interesting topic! 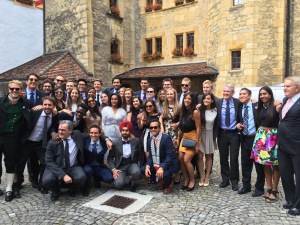 July 15, 2016.  The day I graduated in a castle built at the end of the 10th century.  This was definitely a graduation like none other.  Among other unforgettable moments; only 32 students were part of the ceremony, representatives from 3 universities attended to thank us for studying at their institutions, the new secretary general of FIFA delivered a graduation speech, and quotes from Drake songs were used in another speech.

Cheers to the FIFA Master Class of 2016 for allowing me to ride the roller coaster with you all!