It is hard to believe that it’s been over a month since I arrived in Namibia!  Feels like it was just last week that I didn’t know how to use my “oven” and that I was accidentally giving out the wrong phone number.  I’ve still got heaps to learn about life here in the southern hemisphere but I can proudly say I’ve mastered a few things such as how to put credit on my phone and say thank you in Afrikaans.

My first week in Namibia was a bit of a blur.  On my first day of work, I received flowers that a friend from Australia sent for my birthday and I attended a press conference from which I ended up in the newspaper the next day! 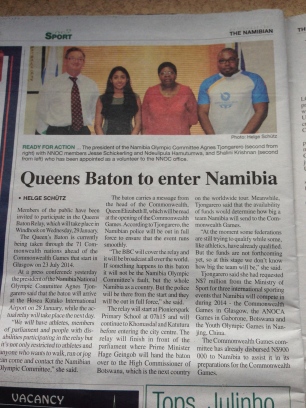 The next week was the Queen’s Baton Relay, and after that, things settled down a bit – meaning I flew to Johannesburg for a week of training.  The first half of the week was dedicated to learning the sport management database ZEUS that I am now implementing in my host country.  Most of the other CSO’s were at this training as well as some additional African National Olympic Committees.  Although we had only met once before (at Pre-Departure Training in December) it felt like I was reunited with my long lost friends.  Hearing about everyone’s unique experiences so far was one of the highlights of my week.

Zeus training soon turned into General Orientation for the CSP 6 Program.  Colin took us to a different location out of Johannesburg and here we discussed what we hope to get out of this year, our work plans and much more…. I ended up staying the weekend in Joburg after training ended because I have a few friends who live in the city.  Seeing them was definitely the best way to end the week and we completed a few essentials – shopping, seafood in Nelson Mandela square, and the apartheid museum.

Back in Namibia, I began to use the Zeus system to store and sort all of our athlete and contact management but I managed to make my way back to Johannesburg the next weekend.  Why would anyone do that? ULTRA MUSIC FESTIVAL, that’s why!  This was the inaugural Ultra in Africa (it’s held every year in Miami) and it did not disappoint! I spent the weekend with a friend – I can thank the Know India Programme for all my Joburg friends – and we went dancing in a field for 12 blissful hours.  For those in the EDM world; the show ended with Martin Garrix waving a massive South African flag and standing on Tiesto’s shoulders, while Alesso, Afrojack and Krewella all DJ’d together.

Most of my work so far has revolved around the Zeus program.  We have a very small yet efficient office here and as a result I am the sole Zeus ‘master.’  Accreditation information for the 2nd African Youth Games was submitted last week, so we can take a breath before similar information is due next week for the Commonwealth Games!

When I’m not at work (or in Joburg) I’ve been pretty busy.  I plan to get involved with women’s soccer soon but for now I’ve been training with a mens team at a German sports club.  Most of these guys have never played with a girl and they’re astounded that I can (almost) keep up.  Being primarily German, their average height is about 6 feet tall, so compared with my 5feet 3 inches, I like to think I do twice as much running as them. 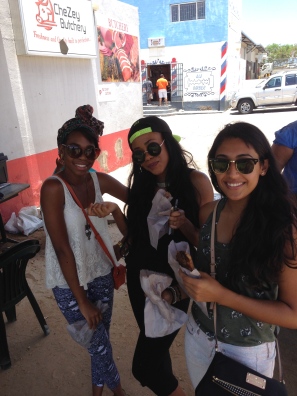 My number one friend these days is hands down Skype, but I’ve made a few Namibian friends of my own.  Honestly, since I live alone and not right in the city, it’s been a lot harder to meet people than I originally anticipated….BUT I somehow managed to make my first friend while on the plane ride into Windhoek.  She grew up in Copenhagen but is half Namibian, and has come here for three months to spend time with family and do some volunteer work.  Having a friend here who knows people has been incredible.  Her family is happy and eager to take us out and spend time with us and I’ve been able to experience some traditional Namibian meals with them, such as Kapana – basically meat cooked on the side of the road by anybody and everybody.

I made another friend through the Queens Baton Relay and she reminds me a lot of myself.  She was extremely involved in her university and seems to know everyone.  Thanks to her, last weekend was a weekend of firsts.  I attended her 21st birthday ceremony – they’re like a coming of age here, similar to Australia – and food was catered and speeches were made.  Not knowing anyone, I volunteered to be the photographer but naturally I was singled out and had to give an impromptu speech.  It turned out quite well because even though some people couldn’t understand me, everyone understood that I was from out of town and then wanted to talk to me.  By the end of the night I was invited to Sunday’s Christian church service that’s run by the university.  Here, my friend was the singer and most of the people I had met the night before were in attendance.  Not being a Christian myself, the last time I attended a church service would have to be more than 10 years ago!  It was quite an experience to say the least.

All in all, its been quite an eventful experience!  I also feel a bit victorious every time I receive a snapchat or text from someone in Canada showing me the latest snowfall or ridiculously low temperature – its about 28° celcius here everyday 🙂

38cm, this time for the kids in 🇪🇸💇🏽‍♀️
Stoked to finally (be able to) enjoy a proper 🏔🇨🇭winter #3yearslater #thekneeliveson #saharasandfilter
Not getting over these views anytime soon 🏔🤩 #winterishere #chaletliving #snowdate
Loading Comments...
%d bloggers like this: